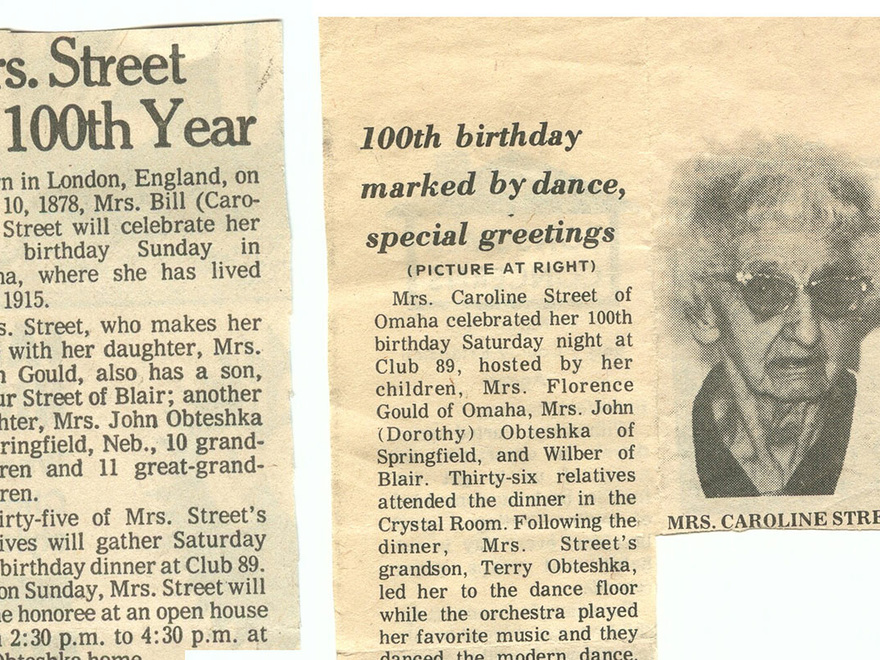 Caroline Sarah (Warman) Street celebrated her 100th birthday in Omaha, Nebraska in September 1978. Two scanned newspaper articles related to the event are presented here. I have attempted to transcribe the articles herein, and to provide a table of associated genealogical facts. (Even between these two articles which appeared within days of each other, historical dates related to her immigration disagree.)

Thirty-five of Mrs. Street’s relatives will gather Saturday for a birthday dinner at Club 89. And on Sunday, Mrs. Street will be the honoree at an open house from 2:30 p.m. to 4:30 p.m. at the Obteshka home.

Out-of-town guests will in- clude a granddaughter, Mrs. Gloria Cox of Sioux Falls, S. D., and her family; and grandsons Michael Kelly of Littleton, Colo., John Kelly of Fort Lauderdale, Fla., and Terry Obteshka of Lincoln, with their wives.

Mrs. Street and her late husband were married in London and in 1908 moved to Canada, where they lived before coming to the U.S.

Although her hearing is impaired, Mrs. Street is in excellent health and has never been a hospital patient. She knits and “does beautiful handwork,” according to her family.

She recently received birthday greetings from President and Mrs. Carter and is looking forward to receiving a similar message from England’s Queen Elizabeth.

Mrs. Caroline Street of Omaha celebrated her 100th birthday Saturday night at Club 89, hosted by her children, Mrs. Florence Gould of Omaha, Mrs. John (Dorothy) Obteshka of Springfield, and Wilber of Blair. Thirty-six relatives attended the dinner in the Crystal Room. Following the dinner, Mrs. Street’s grandson, Terry Obteshka, led her to the dance floor while the orchestra played her favorite music and they danced the modern dance. She was then invited on stage by the band leader where everyone sang “Happy Birthday”.

On Sunday open house was held at the home of her son-in-law and daughter, the John Obteshkas in Springfield from 2:30 to 4:30 p.m.

Others came from Blair, Omaha, Lincoln, Springfield, and parts of Iowa. Mrs. Street was recipient of many gifts, cards, flowers and gifts of money. Among the congratulatory messages came one from Queen Elizabeth of England and President and Mrs. Jimmy Carter, Washington D.C. and a letter from her physician Dr. Jack Lewis of Omaha who called her his star patient and the only one of her age coming to his office for a routine check up.

Mrs. Street, a native of London, England came to Canada with her husband in 1905 where they spent a year before moving to Omaha in 1906 and resided there. Mr. Street is now deceased. Mrs. Street has made her home with her daughter Florence Gould in Omaha for the past 26 years. She has 20 grand- children, and 21 great grandchildren.

Mrs. Street enjoys good health and boasts that she has never been hospitalized during her entire life. She attributes her long life to accepting life day by day as it is, having the courage to take things as they come and living a relaxed life. She is a member of the Episcopalian Church, her hobby is crocheting and knitting and she keeps up with current news by newspapers, TV and radio.