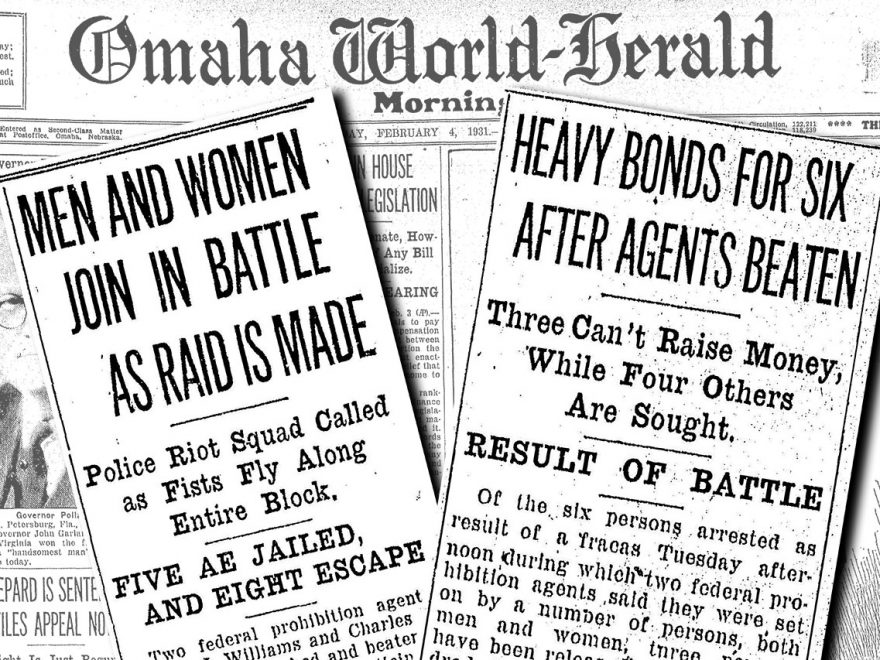 My family was generally aware that my grandmother had been arrested at one time for assaulting a federal agent. Apparently this was in the days of prohibition, and officers came by asking questions about a still they suspected her father of operating. The story — as told by the family — is that one of the officers pushed/shoved her mother (my great grandmother) and my grandmother retaliated by hitting him back. We were told that she was let off when she explained this to the judge.

Thanks to electronic search and the archives at the Omaha World Herald newspaper, I was able to find the original articles about the event. All of this happened before any of my parents and aunts/uncles were born, so we are just now seeing this for the first time.

My grandmother was married to her first husband at the time, and was pregnant with her first child. She is listed as Dorothy Kelly in the articles below. Her father — my great grandfather — is William Street who was apparently operating a still in his house during prohibition. He is incorrectly identified by the name “Streeter” in the first article.

These articles appeared in the Omaha World Herald on February 4th & 5th, 1931. Links to the original newspaper images are provided at the bottom of the page.

MEN AND WOMEN JOIN IN BATTLE AS RAID IS MADE
Police Riot Squad Called as Fists Fly Along Entire Block,
FIVE AE JAILED, AND EIGHT ESCAPE

Two federal prohibition agents, Claude J. Williams and Charles H. Davis, were attacked and beaten in a series of fist fights, participated in by both men and women of the neighborhood, that lasted for about an hour Tuesday afternoon on South Forty-eighth avenue. As a result, five persons are in jail and eight others are sought.

The two agents were walking along the street when they spied William Streeter, 2139 South Forty-eighth avenue, carrying what they thought to be mash to the alley to dump, they related afterward. Williams stopped Streeter while Davis went to telephone for a search warrant.

Returning with a “telephone warrant,” Davis, Williams and Streeter had not been in Streeter’s house long when a stranger entered. He, too, was held by the agents, but while Davis was in the cellar dumping out mash, the stranger started to walk away from Williams. Williams followed him, stopping him at the alley.

While Williams and the man were talking, Ted and William Sims, brothers, of 2142 South Forty-eighth street, joined the group. Later another stranger and a man clad in a red sweater who identified himself as a city fireman who lived in the neighborhood, approached.

Then the fist fight started. While some of the men held Williams, the others attacked him with their fists, the latter alleges. Escaping from his assailants, Williams went into the house and got Davis, the five men waiting outside. When the two agents reappeared, one held Davis while the other four worked out again on Williams, the agents, said.

Both men got away again, and Davis stayed in the house while Williams went to telephone for help. Neighbors refused the use of their telephones, he said and he walked the three blocks to Center street and called for the police riot squad. Two emergency cars, loaded with 20 policemen, arrived with three machine guns and four riot guns beside the regular pistols, started for the scene.

In the meantime, Davis was being attacked in the house by Streeter, his daughter, Mrs. Dorothy Kelly, 2144 North Nineteenth street, and Streeter’z bulldog, he related later. Williams came back to the house, but while they were waiting for police reinforcements, Streeter decided to leave.

As Streeter left the house, he was joined by two neighbor women, who started to take him down the street. When the two agents tried to stop him, the two women and three other women who had joined them began battling the agents.

For one and one-half blocks north the scuffling continued until the group arrived in front of the home of a man who gave his name as Jim Murphy, but who is alleged to be Nate Kelly, 2101 South Forty-eighth street. Kelly is alleged to have joined the attack on the agents.

Just then the emergency cars arrived, and the policemen jumped out with their guns to halt the “riot.” Streeter was arrested on a charge of unlawful possession of a still, mash and liquor. Agents say they found a 75-gallon still in his house.

The two Sims brothers, Nate Kel- ly and Mrs. Dorothy Kelly were arrested on charges of unlawful in- terference with federal officers, but five women and three men escaped. Bonds for the four arrested were set at one thousand dollars cash each. The agents said charges would be filed against any of the eight they are able to identify.

Williams was badly beaten about the face, and suffered a cut ear and lip and several loosened teeth. Davis exhibited no marks of violence. Neither of the agents was carrying a gun when they were attacked, they assert.

HEAVY BONDS FOR SIX AFTER AGENTS BEATEN
Three Can’t Raise Money, While Four Others Are Sought.
RESULT OF BATTLE

Of the six persons arrested as result of a fracas Tuesday afternoon during which two federal prohibition agents said they were set on by a number of persons, both men and women, three persons have been released under five hundred dollars bonds and three are being held, unable to make bonds. Four others are being sought. Hearing for all was set for Friday morning at 11 o’clock.

Bonds of five thousand dollars each was set for Ted and William Sims, brothers, who Agent Claude J. Williams charges were the worst offenders. Bond of $1,500 on a still possession charge and of two thousand dollars on charges of resisting the officers was ordered by Comissioner Mary Mullen for William Street, 2139 South Forty-eighth aveenue, whose arrest started it all. The other agent was Charles H. Davis. All those held are charged with obstructing administration of justice by resisting officers.

Those released were Street’s wife and their daughter, Mrs. Dorothy Kelly, and Nate Kelley, alias Jim Murphy, not related to Mrs. Kelly. Two other men and two women also were charged in blank.

Stories of the agents and those arrested and neighbors vary somewhat, but Williams’ puffed face and cut ear were testimpny that he had been in a fight. Davis was not marked, but said he had been kicked in the back.

Williams says that while he and Davis were questioning Street in the latter’s home, on the subject of parts of a still found on a vacant lot adjoining his, a stranger came in and that later, when the stranger vent out and Williams went after him, the Sims brothers “jumped on him.” The Sims brothers say Williams came into their garage, across the alley from the Street home. The Sims brothers live at 2142 South Forty-eighth street.

Williams says he was refused use of a telephone in several houses, and finally went three blocks away to call the police riot squad which came out armed with machine guns.